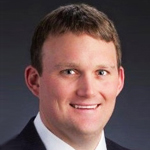 Greg’s leadership career began in 2006 when he was commissioned as a 2nd Lieutenant in the United States Marine Corps. During his first deployment, he led 35 Marines in combat operations on the western border of Iraq, where he planned and executed over 200 combat patrols and missions. During his second deployment, he was responsible for coordinating all fire support strikes and medical evacuations within his area of responsibility.

Greg’s career with EFS began in 2013, holding multiple operational leadership roles within the trades division. He then served as Key Account Manager, where he managed a portfolio totaling $21 million in annual revenue. He worked with internal resources to grow capital replacement programs for several customers, including energy saving initiatives and mechanical system evaluations. In 2018, he also assumed responsibility for the operational and financial performance of the western region of the EFS Field Organization, driving profit generation initiatives and restructuring of the regions to better meet customer demands.

Greg enjoys spending time with his wife and son, as well as entertaining family and friends. His hobbies include lifting weights, playing and watching his son play hockey, and spending time at the beach.